The 2017 Shanghai Shanghai Expo will showcase the “big picture of the laser industry” and let you become an industry person instantly!

The total output value of global energy lasers and information lasers has exceeded $ 100 billion, of which the energy laser industry accounts for about $ 30 billion. The income status of leading international companies indicates that the overall laser industry’s growth rate will remain at about 10%. The growth rate of leading enterprises will exceed 50%; the overall sales of laser equipment will be greatly affected by macroeconomics.

The laser processing industry in China during its growth period has been growing exponentially. At present, four laser industrial belts in Central China, the Pearl River Delta, the Yangtze River Delta, and the Bohai Rim have been formed, occupying 90% of the laser industry in China. There are also a small number of laser industries in Changchun and Fuzhou. The laser industry chain is gradually being formed. Among them, laser audio and video, laser communication, laser processing, laser medical treatment, laser detection, laser printing equipment, etc. are attracting great attention as new economic growth points. 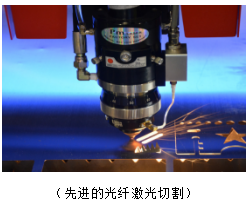 The country has formed:

In recent years, the laser industry has undergone major changes.

First, many domestic laser companies have entered the capital market. Second, industry mergers and acquisitions and integration have accelerated significantly.

Once again, to explore the core components of the laser industry, high-power semiconductor laser chips are the cornerstone and source of the entire laser processing industry chain. They are the prerequisites and guarantees for achieving small size, light weight and stable power output of laser systems. They are widely used in advanced manufacturing , Medical beauty, aerospace, security protection and other fields.

Developed countries such as Europe and the United States are at the leading level in the research of high-power and high-efficiency semiconductor laser chips. At present, domestic practical high-power semiconductor lasers rely almost exclusively on imports, which has seriously restricted the development of China’s laser technology industry.

The localization of laser core devices is the only way for the domestic laser industry to break through the development bottleneck.

Whether it is an opportunity or a challenge, it is foreseeable that a new round of laser technology revolution is coming, and the urgent need for the upgrading of China’s manufacturing industry will help China’s laser industry to continue for another golden decade.