Traditional cleaning industrial equipment has a variety of cleaning methods, mostly chemical and mechanical methods for cleaning. With the increasingly strict requirements of China’s environmental protection regulations and increasing awareness of environmental protection and safety, the types of chemicals that can be used in industrial cleaning will become less and less. How to find a cleaner and non-destructive cleaning method is something we have to consider. Laser cleaning has the characteristics of non-abrasive, non-contact, low heat effect, and applicable to various materials, and is considered to be the most reliable and effective solution.

Among the contaminations on the surface of the workpiece, the bonding between the surface of the workpiece and the surface is mainly due to the existence of the following forces: covalent bonds, double dipoles, capillary effects, hydrogen bonds, adsorption forces, and electrostatic forces. Among them, capillary force, adsorption force and electrostatic force are the most difficult to destroy. Laser cleaning technology is to overcome these forces.

These adsorption forces are much larger than gravity (there are several orders of magnitude) and are related to the particle diameter d. The adsorption force exhibits a slow linear decay trend with decreasing particle radius, and the particle mass m is proportional to the cube of the diameter According to Newton’s law, F = ma, when the particle size becomes smaller, the acceleration provided by the adsorption force increases rapidly. Therefore, the smaller the particle size, the greater the acceleration required to remove it. This is why it is difficult for conventional cleaning techniques to remove small-diameter objects. Due to the complex composition and structure of the attachments on the surface of the object, the mechanisms by which lasers interact are also different. The most commonly used theoretical models for explaining this are as follows:

1. The laser generated by the phosgenation / photolysis laser can achieve a high degree of energy concentration by focusing the optical system. The focused laser beam can generate high temperatures of thousands or even tens of thousands of degrees near the focus, making the surface of the object The objects instantly vaporize or decompose.

At present, there is no uniform standard for the structure of laser cleaning equipment. It needs to be determined according to factors such as the actual cleaning method, the type of substrate and dirt, and the effect of cleaning requirements. However, they are still roughly the same in some basic structures. , Mainly including lasers, mobile platforms, real-time monitoring systems, semi / automatic control operating systems and other auxiliary systems. 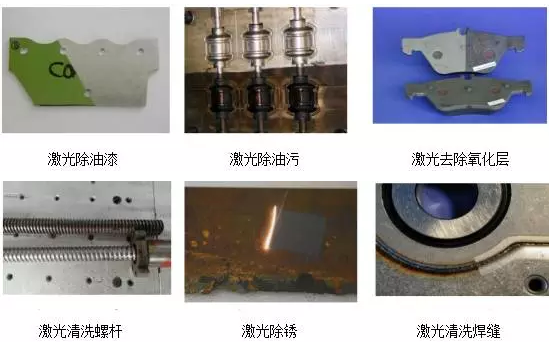