At the Munich (Shanghai) Optoelectronic Exhibition held last week, many laser companies demonstrated the latest technologies and products. Fiber lasers have been a hot source of laser light in recent years. Exhibits from domestic and foreign fiber laser manufacturers are often one of the most concerned.

This year, Wuhan Ruike Fiber Laser Technology Co., Ltd. demonstrated a 20,000-watt fiber laser. It is understood that the product currently displayed is a test prototype, and it will take one year of performance testing before it can be officially launched to the market. 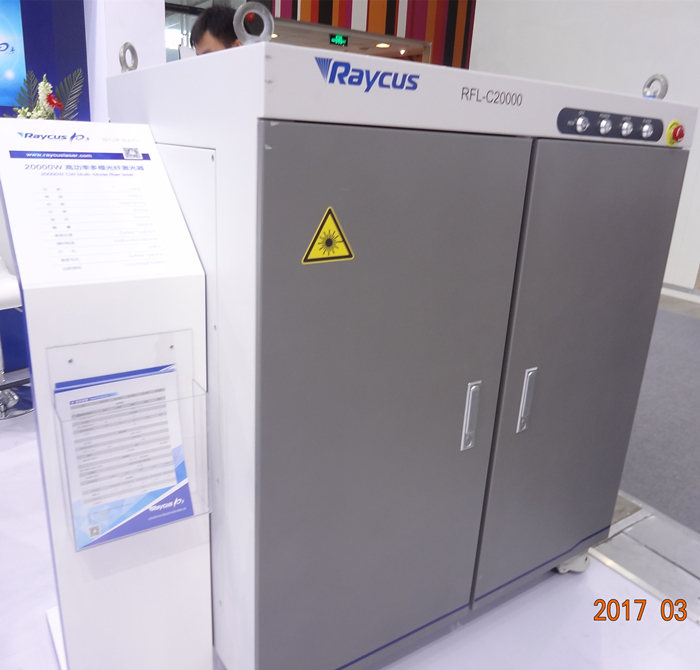 According to reports, the market price of an imported 20,000 watt fiber laser is 6 million yuan. After domestic production, the price is expected to decrease by 40%. As early as 2013, Ruike has successfully developed the first domestic 10,000-watt fiber laser, and is the second company in the world to master this core technology.

Fiber laser is the third generation product after carbon dioxide and semiconductor laser. It releases laser energy by optical fiber as thin as hair, which can be widely used in industrial shipbuilding, aircraft and automobile manufacturing, aerospace and 3D printing, etc. Compared with carbon dioxide laser, fiber laser consumes only 1/5 of its power and 1/10 of its volume, but it is 4 times faster, 20% more efficient, and free of pollution. According to reports, China’s first 10,000-watt continuous fiber laser was successfully developed. After breaking foreign monopolies, the price of 10,000-watt fiber lasers dropped from 5 million yuan each to more than 3 million yuan. Now the 20,000-watt fiber laser is officially unveiled, and the whole machine can be put into operation in 2018, which indicates that China’s fiber laser technology has reached a new level!