Inventory of the top ten laser technologies in 2016

Laser technology, as a young discipline, has brought major changes to human technology, production and life. Whether it is in the fields of processing, scientific research, biology, cutting-edge technology, etc., they have a very large application space, so they continue to be valued by domestic and foreign enterprises and scientific research institutions, and the technology development is changing rapidly. Since 2016, laser technology has also made a series of major breakthroughs. The editors of OFweek Laser Network will take a look at the top ten laser technology developments of the year. (Ranking is not counted)

For the first time, Lucas Novotny, of the Federal Institute of Technology in Zurich, Switzerland, led the research team and measured the tiny “shock” warming effect of photons colliding with microscopic particles.

The research team used lasers to confine silicon dioxide nanoparticles with a radius of about 50 nm into an optical trap, which is an ultra-vacuum chamber. Researchers use a process called feedback cooling, in which the position of the captured particles is monitored and the frequency of the traps is modulated accordingly, extracting the energy of the particle’s motion and reducing the particle’s temperature to the micro-Kelvin level. In an environment where the air pressure is greater than 10e9, the minimum temperature of the particle temperature is determined by the pressure. Below 10e9, regardless of the pressure, the minimum temperature does not change with the pressure. This means that at very low pressures, the predominant reason for limiting cooling is electromagnetic noise in the trap.

Next, the research team turned off the feedback cooling process at very low pressure, allowing trapped photons to freely heat its particles. The difference between the energy states of the oscillating particles is greater than the energy magnitude of each individual photon collision recoil, so the simplest photon-scattered energy does not affect the elastic particles. Sometimes, however, the photons will excite the nanoparticles to a higher oscillation state and gradually heat up. This warming process is random, but by repeating them multiple times and averaging their results, the researchers successfully produced a smooth warming curve showing that the particles heat up when trapped in a higher power laser Faster.

The researchers successfully converted the energy of an electron beam into a coherent light pulse with a conversion efficiency of 30%, which is much higher than the 10% efficiency of most free electron lasers. 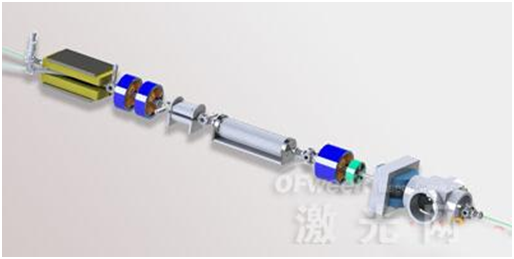 In the demonstration experiment, they used a five-meter-long acceleration tunnel to accelerate the electron beam, guided the accelerated electrons with a spiral path composed of several meters, and irradiated the electrons with an infrared laser. When the laser is irradiated, the electrons decelerate and emit an infrared laser beam with the same wavelength as the original laser. The emitted light is effectively amplified in the process of stimulated radiation. The degree of amplification depends on the initial energy of the electron beam. The team explained that it broke the record of the interaction of “free-space propagating laser pulses and a relativistic electron beam.”

This method may help achieve effective, high-power lasers in a range of wavelengths, including X-rays. Such X-ray sources can be used for faster and more efficient use in etching circuits on semiconductor chips.

In order to develop new high-repetition-rate ultrashort-pulse lasers, researchers from organizations such as Freischler University in Germany, Fraunhofer Institute for Applied Optics and Precision Engineering, and Active Fiber Systems have joined hands with EU ELI Light Infrastructure) project has built a laser system capable of providing up to 6 femtoseconds of 200W, setting a new world record.

This laser system is based on a femtosecond fiber laser with two non-linear compression stages. The system’s pump source includes a fiber chirped pulse amplification (FCPA) system with a coherent synthesis system consisting of up to eight major amplifier channels. During the first batch of tests, the system ran at 1.27MHz and provided 660W power. The final specifications will be set at 100 kHz and 100W.

Specific results have been published in Optics Letters, a well-known journal in the field of optics.

In order to obtain the strong coupling of light and materials, the research team led by Dr. Fern-Diaz of IQC dilutes the refrigerant in the aluminum circuit and builds a superconductor that is cooled to above absolute zero and reaches one hundredth of Celsius Circuit. Laser pulses are used to send photons into the superconducting circuit, and a small magnetic field is applied to control the quantum state in the circuit.

By measuring the transmission of photons, the researchers determined the resonance phenomenon of qubits. Fern-Diaz explained that they measured a wider range of resonance frequencies than the qubits themselves. This means that there is a very strong interaction between photons and qubits. This test set a new record for the strongest light-matter coupling to date, with more than 10 times the intensity. Researchers said that the latest research is bringing research on light-matter interactions into a new field and into the field of quantum optics. The experimental circuit has potential as a quantum simulator for studying other interesting quantum systems in nature. This strong quantum coupling between light and qubits helps scientists to further explore physics research related to strange materials such as biological processes, high temperature superconductivity, and even relativity.

Does antimatter always exist? What is the form of existence? It has always been the focus of attention of scientists, which is also one of the basic problems of modern physics research.

The Shanghai National Laboratory for High-Field Laser Physics uses the interaction of a femtosecond tile laser device and a high-pressure gas target to generate a large number of high-energy electrons. High-energy electrons interact with heavy nuclear material targets to generate high-intensity gamma from a tough radiation mechanism. Rays, gamma rays, and heavy nuclei interact to produce positron-positron pairs. The positron spectrometer has been carefully designed to successfully solve the problem of noise caused by gamma rays. Using different deflection characteristics of positrons and positrons in a magnetic field, positrons were successfully observed under single-shot conditions in the experiment. This is the first time that China has reported the use of lasers to produce antimatter. 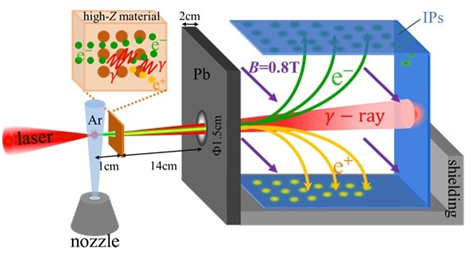 Figure 1: Schematic diagram of positrons generated by an ultra-short and ultra-high-power laser

This discovery will have significant applications in the fields of nondestructive detection of materials, laser-driven positron colliders, and cancer diagnosis.

Since 2014, black phosphorus has received widespread attention in the scientific community due to its excellent properties and is considered to be a two-dimensional atomic material comparable to graphene. However, research on optoelectronics and ultrafast photonics for black phosphorus quantum dots has not yet been carried out. 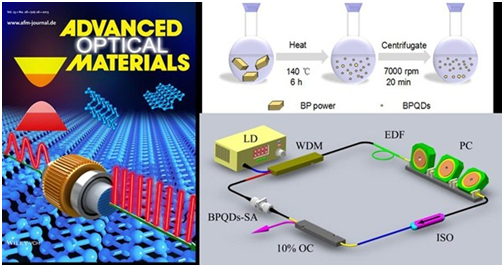 Researcher Yu Xuefeng’s research group of Shenzhen Institute of Advanced Technology, Chinese Academy of Sciences and Professor Zhang Ye’s group of Shenzhen University have made new progress in the preparation of black phosphorus quantum dots and the application of ultrafast photonics. 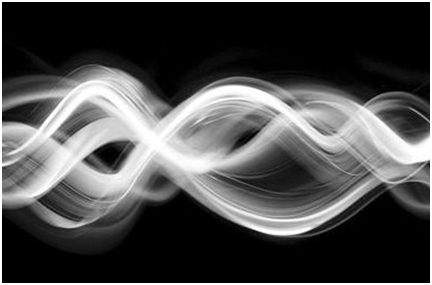 After the scientists at the University of Vienna encrypted the bending laser beam, the traveling distance of the bending laser beam reached 143 kilometers. This marching record set a new world record, almost 50 times higher than the previous record. This new breakthrough may bring revolutionary changes to satellite communication methods.

Under normal circumstances, the changing atmosphere of the wind and clouds will interfere with the transmission of information, resulting in transmission distances that cannot meet actual application requirements. This new study created the record of the longest distance transmitted by a curved laser, but the current speed of encoding and deciphering the information is not as fast as the Morse code used to send telegrams. The research and development team will then use existing technologies such as adaptive optics to improve the information transmission and compilation speed of the curved light system.

For the first time, scientists at the Department of Energy’s Lawrence Berkeley National Laboratory (Berkeley Lab) created a single device that can function as both a laser and an anti-laser. This is a 824-pair repetitive Gain and loss materials are used to construct this device. The device is 200 microns long and 1.5 microns wide. For comparison, a human hair is about 100 microns in diameter. Scientists have demonstrated these two opposite functions in the telecommunications band.

The results of this research are reported in an article to be published in the journal Nature-Photonics. These findings lay the foundation for the development of a new class of integrated devices that can flexibly serve as lasers and amplifiers Modulators and detectors are used.

Cooling superfluids with laser beam for the first time

For the first time, researchers at the University of Queensland in Australia have used a laser beam to cool a special morphological quantum liquid called a superfluid. Lasers are widely used to cool gases and solids, but have never heard of quantum liquid cooling before. The results were published in the journal Nature Physics. 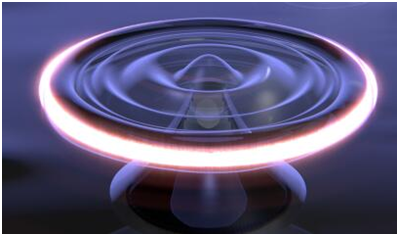 This research can be used to enhance the guidance system sensors to develop quantum devices, to fundamentally explore turbulence in quantum physics, or to vortex a quantum fluid when the temperature approaches absolute zero.

For the first time, scientists successfully photographed the molecular decomposition process in 9 femtoseconds with a laser

Scientists at Kansas State University in the United States and Barcelona Institute of Science and Technology (BIST) in Spain successfully used lasers for the first time to capture the dynamic process of chemical reactions of molecules containing 4 atoms in 9 femtoseconds. The latest study, published in the journal Science, will provide scientists with powerful tools to observe different types of reaction processes and molecular changes in fields such as chemistry, biology, and physics. 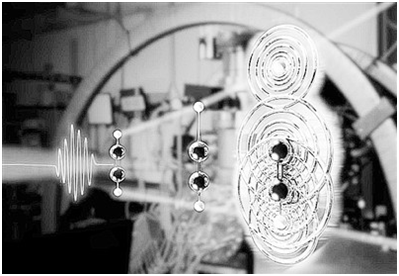 This is a mid-infrared laser-induced electron diffraction (LIED) technique that uses the electrons inside the molecule to take a picture of the molecule to obtain a continuous picture of the chemical bond breaking process in acetylene. They applied a strong laser to the acetylene molecule, activated an electron in the molecule to leave, and started the decomposition reaction of the acetylene molecule. Finally, they took multiple pictures for this molecular change that occurred within 9 femtoseconds. This is the first real-time observation of a molecular decomposition process within 9 femtoseconds. With the help of femtosecond laser tools, the position and sequence of chemical bond breaks can be measured to better understand and control the chemical reaction process.